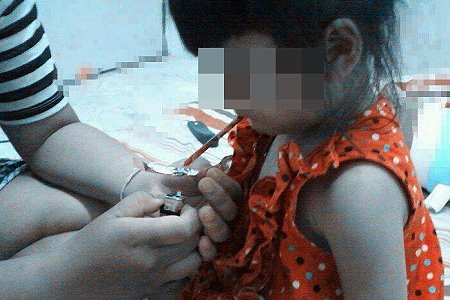 A picture of a Thai toddler smoking meth has been posted widely on Facebook and the popular Thai forum pantip.com over the last week or so. Police are at the moment trying to locate the source of this photograph. The original picture showed the child’s face. It is unknown whether the woman in the picture is her mother or whether she is a beggar who has been abducted.

The method seen here of smoking Methamphetamine is common among experienced Thai teenagers. A thin piece of paper has been rolled up to make a straw. Then some silver foil, usually the lining of a cigarette pack, has been scrunched up into the shape of a boat. The Methamphetamine pill, known locally as Yaba, is put in this container. Then an adapted cigarette lighter that gives off a blue flame is used to heat up the pill. The vapor that is produced is then sucked up the straw.

If you would like to have a part in what the Lord is doing with us in Thailand, we provide a simple and easy way to give online or by mail.
Donate Online