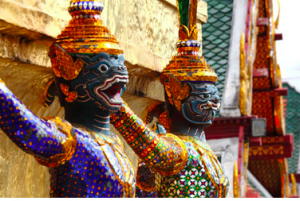 The other night watching Bangkok TV in Thai (it is good practice for learning Thai, believe it or not) we came across a show that was supposed to be scary, and it made me curious to see what a scary movie would be like here. It was pretty corny, but that is actually pretty good for a beginner in the language — things weren’t very subtle.

As we watched, the fears that they were trying to provoke became more obvious. They weren’t the ones that I was used to.

In the States, the common scare tactics seem to be axe murderers, nuts that like to hunt, torture, and kill people, or a rich person having someone killed. (I actually hate scary movies, so if that isn’t an accurate depiction about, let me know.)

Brief Summary of the Plot

This particular show was a spirit’s activity in a house. Remember, this is shown in a place that is dominated by spirit worship…

At first it seemed like the spirit was after the baby, but then the spirit went after the maid and killed her. After that, the dad came home and the spirit changed forms, tempted, haunted, and seduced him. When he was about to give in to temptation, the spirit took him outside, tied him down, scolded him, and was about to kill him when the daughter got home. The dad was spared from ultimate punishment after a good scare about his impropriety.

The points that the show was trying to make

After getting into a conversation with the spirit, we find out that it was protecting them all along. 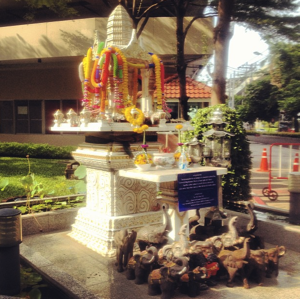 Animism is a spirit-based worldview and lifestyle based around rituals and superstition. Everything is said to possess a spirit, whether it be animals, plants, people, mountains, or rivers. There is a spirit everywhere and everything has a spirit.

This produces a fear of just about everything. If there are spirits everywhere that govern the ‘luck’ of the living, then we be careful to please them however we can. If something goes wrong, it is because we made one of them upset.

Now to figure out which one….and what I did wrong…

To be safe, you’d better contantly give gifts and pray for their help at the numerous spirit houses.

I thought Thailand was Buddhist??

The technical term is “Folk Buddhism.” It is elements of Buddhism, Animism, and Spiritism all mixed together. The contradictions between them are ignored and people just live with a new blend.

Buddhist beliefs like karma dominate, and seem to regulate morals, but worship here is largely animistic. Offerings to spirits, lighting incense, contracts, and a dozens of other superstitions are regularly practiced.

Back to the show…

So, as we watched the show, clues that it was written for a different audience became more obvious. We aren’t in Kansas any more.

Instead of malicious people, it is malicious spirits. Instead of lustful motivations of a particular person, events unfold to show a cause/effect relationship between the spirit and the victim.

Demons are not entirely evil, they are just harsh judges that are not to be trifled with. They punish wrongdoings and act as an enforcer so that people get what they deserve, so you want to be on the good side of the demons, and you want good demons on your side.

They are actually nice if you get to know them and they can help you and give you advice.

There are not random acts of evil nor innocent victims. In animism, the spirits rule (not God or humans), so if they are causing something bad to happen, there is a reason.

If you would like to have a part in what the Lord is doing with us in Thailand, we provide a simple and easy way to give online or by mail.
Donate Online